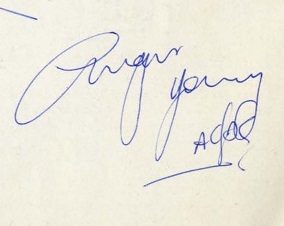 Angus McKinnon Young (born 31 March 1955) is an Australian musician; best known as the co-founder, lead guitarist, songwriter, and sole constant original member of the Australian hard rock band AC/DC. He is known for his energetic performances, schoolboy-uniform stage outfits, and his own version of Chuck Berry’s duckwalk. Angus Young autographs ranked 24th in Rolling Stone magazine’s 100 greatest guitarists of all-time list. In 2003, Young and the other members of AC/DC were inducted into the Rock and Roll Hall of Fame.

Prior to moving to Cranhill, William worked first as a wheel boy in a rope works and then as a machine/saw operator in an asbestos/cement business. In 1940 William joined the Royal Air Force serving in World War II as a flight engine mechanic. After the war William worked as a yard man for a builder and then as a postman.

Both Young and Malcolm were in a band with George and his music partner Harry Vanda called Marcus Hook Roll Band. The project released an album in Australia called Tales of Old Grand Daddy.

Young was 18 when he and Malcolm formed AC/DC in 1973. Young was on lead guitar, Malcolm on rhythm guitar, Colin Burgess on drums; Larry Van Kriedt on bass guitar and Dave Evans on vocals. The band had a recording contract with Albert Productions; it had also produced the work of the Easybeats.

“Can I Sit Next To You Girl”, the band’s first single, was later re-recorded with Bon Scott autographs as their vocalist. Also, they decided upon the name AC/DC, suggested by their sister Margaret, who saw the letters “AC/DC” on the back of her sewing machine. 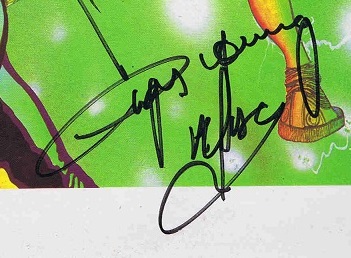 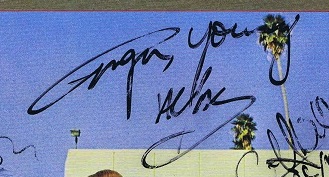 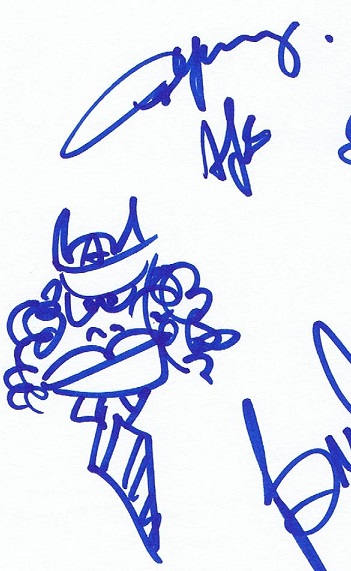 If you have signed memorabilia and looking to sell. We could be interested: