William Thomas Ward (born 5 May 1948) is an English musician and visual artist, best known as the original drummer of the British heavy metal band Black Sabbath. In addition, He also performed lead vocals on two Black Sabbath songs: “It’s Alright” from the album Technical Ecstasy and “Swinging the Chain” from the album Never Say Die!. Known for his very unorthodox style of playing the drums, often using snare-drills and tempo-drop to match both vocals and riff. 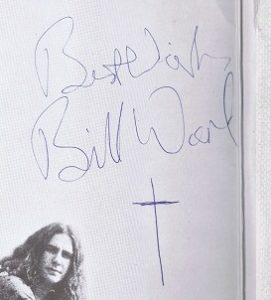 Ward started to play drums as a child, listening to the big bands of the 1940s and his major influences were Gene Krupa, Buddy Rich and Louie Bellson. Later he was influenced by drummers such as Larrie Londin, Bernard Purdie, Joe Morello, Keef Hartley, Hughie Flint, John Bonham, Ringo Starr, Jim Capaldi and Clive Bunker. Additionally, In the mid-1960s Ward sang and played drums in a band called The Rest. Ward and guitarist Tony Iommi played together in a band called Mythology, and upon that band’s dissolution joined vocalist Ozzy Osbourne and bassist Geezer Butler, who had played together in a band called Rare Breed. Furthermore, the new band called themselves Earth, but were soon renamed Black Sabbath.

After a few years in hiatus, Ward decided to return to playing music in the late 1980s. In 1989 he went to work on a solo album; which featured a huge array of guest musicians; including former Black Sabbath bandmate Ozzy Osbourne and his guitarist, Zakk Wylde. Released in January 1990, Ward One: Along the Way showcased Ward’s versatility in musical tastes and abilities; he even sang vocals on some of the songs. It would be seven years before he released his second solo album, When the Bough Breaks, in 1997.

In 2002 he released the song “Straws” as a single for charity. The song would reappear on his 2015 album Accountable Beasts.