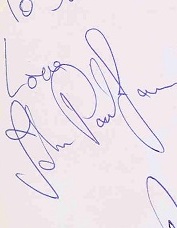 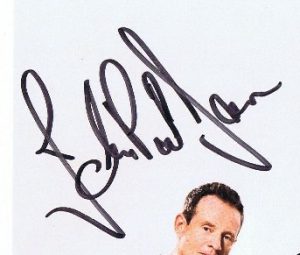 Born John Richard Baldwin  1946), better known by his stage name John Paul Jones. An English musician and record producer who was the bassist and keyboardist in the rock band Led Zeppelin. Prior to forming the band with Jimmy Page in 1968, he was a session musician and arranger. After the death of drummer John Bonham in 1980, Zeppelin disbanded and Jones developed a solo career. He has collaborated with musicians across a variety of genres, including Josh Homme and Dave Grohl with the supergroup Them Crooked Vultures. 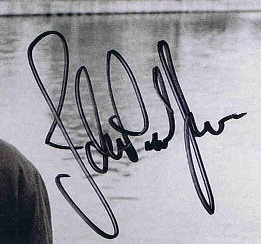 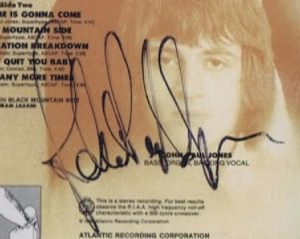 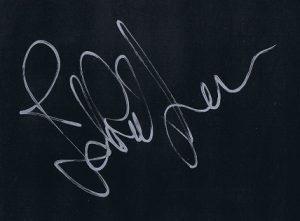 Additionally, John Paul Jones autograph joined his first band, The Deltas, at 15. He then played bass for jazz-rock London group, Jett Blacks, a collective that included guitarist John McLaughlin. Jones’ big break came in 1962 when he was hired by Jet Harris and Tony Meehan of the successful British group The Shadows for a two-year stint. Shortly before hiring Jones, Harris, and Meehan had just had a Number 1 hit with “Diamonds” (a track on which Jones’ bandmate-to-be Jimmy Page had played.) Furthermore, Jones’ collaboration with the Shadows nearly prevented the future formation of Led Zeppelin, when the parties engaged in talks about the possibility of Jones replacing their bassist Brian Locking. Who left the band in October 1963, but John Rostill ultimately chosen to fill the position.

Widely considered to be a highly influential and important bassist, keyboardist and arranger in the history of rock music. Many notable rock bassists influenced by Jones, including John Deacon of Queen, Tom Hamilton of Aerosmith, Geddy Lee of Rush, Steve Harris of Iron Maiden, Flea of Red Hot Chili Peppers, Gene Simmons of Kiss, and Krist Novoselic of Nirvana. Named the best bassist on Creem Magazine’s 1977 Reader Poll. In 2000, Guitar magazine ranked him third in the “Bassist of the Millennium” readers’ poll.

Furthermore, In October 2010, Jones awarded a “Gold Badge Award” by The British Academy of Songwriters, Composers, and Authors for his outstanding contribution to Britain’s music and entertainment industry. Honoured with the “Outstanding Contribution Award” at the Marshall Classic Rock Roll of Honour Awards. In 2014, John Paul Jones autograph ranked first on Paste magazine’s list of “20 Most Underrated Bass Guitarists.