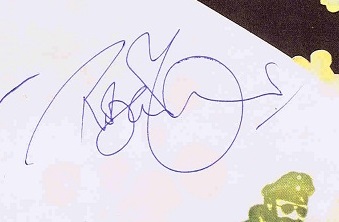 A British rock singer and songwriter, known as the vocalist and lyricist for the band Led Zeppelin. Inspired at a young age by Elvis Presley, Plant left school to begin his musical career. He performed with a number of groups before he was discovered by Jimmy Page, who was in search of a lead singer for a new band he was forming, called the New Yardbirds. The group eventually became Led Zeppelin. Plant launched his solo career in 1982, reuniting with the band for occasional benefits.

After a short tour as the New Yardbirds, the band quickly renamed themselves Led Zeppelin. They landed a spot as the opening act for the American rock group Vanilla Fudge during their U.S. tour. The band then released their first album, Led Zeppelin I in 1969, which earned mixed reviews. While critics may have disliked the group; Led Zeppelin autographs won over fans with Plant’s raw, powerful vocals and Page’s masterful guitar work. They produced a sound with an engaging mix of hard rock and heavy metal while drawing inspiration from other types of music.

In 1998, Robert Plant and Jimmy Page put out a new studio album, Walking Into Clarksdale. The recording earned rave reviews and netted the pair a Best Hard Rock Performance Grammy win for “Most High.” Furthermore, after a long hiatus, Plant returned in late 2001 with his solo album Dreamland. Two years later, he debuted Sixty Six to Timbuktu, a two-disc compilation dedicated exclusively to works from Plant’s solo career, including “Tall Cool One” and “Upside Down.”