Keith Moon was born on August 23, 1946, in London, England. He joined the Who in 1964, at age 17. In addition to his work with the Who, Keith Moon also collaborated with future members of Led Zeppelin on several projects. Additionally, he released a solo album in 1975. He died tragically of a drug overdose on September 7, 1978, when he was just 32 years old.

Famed rock drummer Keith John Moon was born on August 23, 1946, in London, England, to parents Alfred and Kathleen Moon. His father worked as a maintenance mechanic and his mother was a cleaner. At an early age, Moon showed an interest in music, listening to songs on the family’s record player.

Growing up in London’s Wembley neighborhood, Moon was at best a mediocre student. He has been described as a hyperactive student and kind of a loner. Moon did, however, show some promise as a musician. He started out playing the bugle and then the trumpet. At the age of 14, Moon received a drum kit from his mother. He took to the instrument without much instruction.

In 1962, Moon joined his first band, the Escorts. He moved on to his next group, the Beachcombers, later that year. Before long, Moon teamed up with Roger Daltrey, Pete Townshend, and John Entwistle to make rock history. 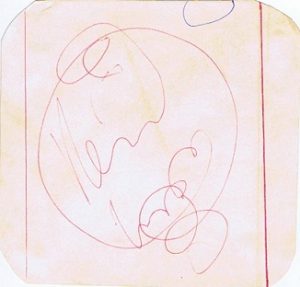 In 1964, a 17-year-old Moon joined forces with Daltry, Townshend, and Entwistle in the Who. The band had their first major breakthrough in the United Kingdom the following year with the song “I Can’t Explain.” Two years later, the Who hit the American charts with their first top ten single with “I Can See for Miles.”

In their early performances, the Who developed their aggressive style, which often involved them destroying their instruments on stage at the conclusion of a performance. Moon was a very enthusiastic, although not very good, singer. The rest of the band members banned him from singing on their albums, which resulted in a game whereby Moon kept trying to sneak into recording sessions.

The Who Autograph Examples